We’re less than two weeks into October and this is already shaping up to be a memorable month in Tempe.  We’ve already had Tour de Fat and Oktoberfest come and go, ushering in a season filled with fun, friends and great beer.

October also brought us the official opening of Pedal Haus Brewery, 730 S. Mill Ave., Tempe, AZ 85281, Tempe’s newest brewery and restaurant. Pedal Haus is the creation of Julian Wright, the man that brought us local favorites like La Bocca and Handlebar Tempe. Known by some as the unofficial “Mayor of Mill Ave.”, Julian has struck gold again with Pedal Haus. It’s a great space and it has one of the biggest outdoor patios I’ve ever seen, perfect for grabbing a bite and a beer on these cooler nights that are just around the corner.

I’ve had the opportunity to eat there twice already – both times for lunch. The atmosphere is inviting, as guests are greeted by a pretty cool archway made of old bicycle spokes. It’s hard not to notice the large brew tanks towards the back of the restaurant. Pedal Haus plans on brewing three signature beers. I asked when they planned on having the first one ready to go and they said by the end of October/beginning of November. No details yet on the name or kind of beer – I love a good mystery.

The menu features a nice selection of salads, sandwiches, entrees and gastropub fare. I ordered the Open Face Hot Ham and Cheese sandwich. It has a roasted garlic crème, gruyere and is topped with a sunny side up egg. It was absolutely incredible and really filling. The ham is cut really thick, so if you’re expecting some kind of thin deli-style, meat, you’ll be disappointed. I highly recommend trying this.

My second time over, I went a little healthier and decided to get a salad. The Avocado Salad has grilled corn, tomatoes, baked goat cheese, cilantro, toasted croutons and my new favorite dressing – jalapeno lime vinaigrette. I added grilled chicken as well.

My coworkers complimented on “how pretty” the salad looked with “all the beautiful colors.” My compliments go to the chef because it was really tasty. Usually, I hear ‘salad’ and think “tasteless food but it’s ok because I’m eating healthy.” This was a fairly hearty salad that tastes great. I eat salads on a pretty regular basis, and I’ll tell you that this was one of the better salads I’ve had in a while.

So far, I’ve been really impressed with the food and atmosphere of Pedal Haus. Not ashamed to admit that I already know what I’m ordering the next time I go there (the Chicken Pot Pie). If you haven’t been already, I highly recommend it. Tempe is full of weekend events and this is a great place to go when you inevitably get hungry and start walking down Mill Ave. trying to find a place to eat.

Tempe Tourism is a great resource for finding your next favorite Tempe restaurant or you can call us at (480) 894-8158. 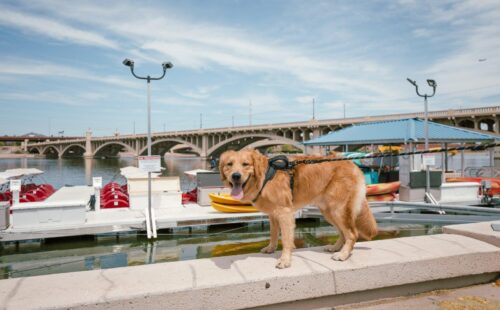 Bring your pet to these dog-friendly places in Tempe Tempe Spring Festival of the Arts in Downtown Tempe